skip to main | skip to sidebar

Hey everyone, My new site is up and running and pretty much finished.
I have started posting on my new blog, http://www.tylerduncanracing.com/blog/ so if you have been following me here or have me on your blogroll, thank you and please transfer over to my new site!
See you there!
Posted by Tyler Duncan at 1:36 PM No comments:

Hello Everyone!
In an effort to actually use the university degree seem to be finally finishing, I have started offering coaching services, in addition to my racing aspirations. So, to better serve my athletes, I have started a new web site that will allow athletes to learn about me, my services, and access their programs.
The Web site will also serve as my new blog, so if you have been following my poorly edited ramblings; let me first say thank you! and ask you to please continue following me at my new web site. Also if you use my blog as a jumping point to find all the other fantastic athletes I follow, don't worry, I have transferred all the links to the new site.
So this will be my last post to this site, I look forward to hearing from you all at my new site www.tylerduncanracing.com
Best Wishes,
Tyler D.
Posted by Tyler Duncan at 3:12 PM No comments:

The Ocean is Salty...

That was about the only thing I could think of as I was standing on Jericho Beach last Saturday. I was getting ready for a short swim to test out the arms before the Vancouver International Half-Iron on Sunday. Having never done an ocean swim race before I was a little bit nervous going in to it, mostly because I tend to swallow a fair bit of water during races, and as I said above......
For my third half relay of the year the format remained the same, I took care of the swim and the bike while my third runner of the year, Leif, took care of the run. I have been really fortunate this year to find some truly talented runners to team up with for my races, I has defiantly made getting through the injury season a little easier!
As you may have guessed, my first Ocean race didn't feel all that great. I did end up swallowing some water, and my stomach was not super happy getting on to the bike. I was a great learning experience though, and my swim is a constant work in progress, so I came away from it with some good ideas to focus on.
The Bike was a different matter, all I can say is.... Fantastic!! After my stomach settled down a little and I started to feel a bit of power in my legs I got down to business and started to put some hurt on. The Vancouver course is basically a series of out and backs, so I was constantly seeing the leaders and judging the time gap between us. I was able to get a good pace going with Anthony Toth and we worked off each other for the whole ride, pushing the pace back and forth. We were able to make up serious time that was lost on the swim and ended up catching all but the top lead men!
It was an amazing field to race against, Jeff Symonds destroyed the field, while Steven Kilshaw and Mike Neill both had fantastic races on their way to Ironman (Mike at Lake Placid in a couple weeks!). It was a pleasure to get to see where I was against some of the bigger names in Canada. I still have a long way to go, but I'm pretty happy with where I'm at right now!
Best Wishes!
Posted by Tyler Duncan at 3:45 PM No comments:

Tennis is a sport I will never understand...

Apparently not a problem for this guy!! Thanks to A-Russ for posting!

Posted by Tyler Duncan at 7:29 PM No comments:

Yesterday was the 15th annual New Balance Half-Iron at Elk lake, and a great day was had by all!!
As I am still struggling with my shins and a serious lack of running, I was racing the relay with my roommate Myke! As per the pattern for my season, I was doing the swim and the bike while Myke was brining it home with the run.
My portion of the race started of pretty well. I got a much smother start to the swim then I usually do. I was able to hang on to the leaders feet until right around the first buoy, at which point they slowly started to pull off into the distance. I settled in to a good rhythm though and came out of the water feeling strong.
The bike was great!. Noa and I had discussed a couple of key points coming out of Shawnigan including bringing my cadence down from my normal hill crushing 105-110 to a more maintainable 85-90, and adjusting my pre-race nutrition. Keeping to the plan kept me feeling strong and hammering hard right to the end. My bike time was right on par with the leaders, so I managed to get Myke into a good position for the run.
Here are a couple pics from the bike, Thanks to Mari and Adam! 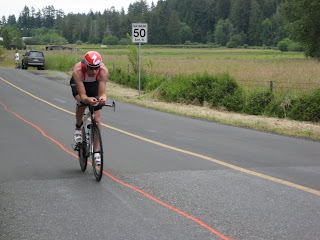 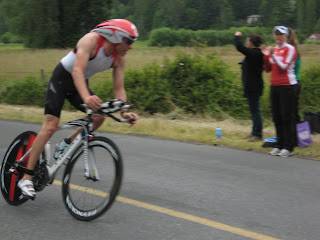 Myke pulled out a great run, and brought us home in a very respectable fashion. We had been hoping to repeat my win in Shawnigan but in the end we were cleanly beaten by some seriously strong teams and finished 2nd overall in the men's relay division. So my goal for the west coast series goes from four wins to four podiums, but I'm still really happy with the day ;)
A huge congratulations goes out to Adam O'Meara for pulling out his first win! He is one of the most dedicated athletes I know, and truly deserves his success!
Thank you to all the Volunteers who were helping out on the weekend, and all the organizers for a great race!
Posted by Tyler Duncan at 10:59 AM No comments:

What happens when training gets boring

I bet this guy doesn't worry about traffic to much...
Posted by Tyler Duncan at 5:33 PM No comments:

A weekend in Wasa

I have been feeling a little antsy lately so I decided to accompany Leif and Kamal up to Cranbrook last weekend for the Wasa Lake Triathlon. The trip served two purposes, first it gave me a chance to get out of Vic and get a little variety in my training, but mostly it was an opportunity to share a trip with some good friends and support my teammates!
The weekend couldn't have been better. Seeing as I was just there to train and watch the race, I was able to relax and enjoy the fantastic 30 degree weather (a nice change from the "summer" here in Vic). 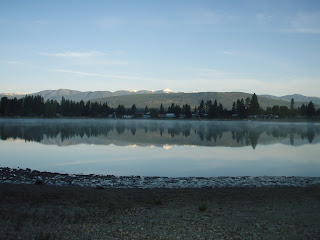 A wonderful Morning for a race! 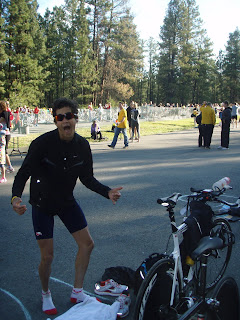 Kamal in a great mood before the race 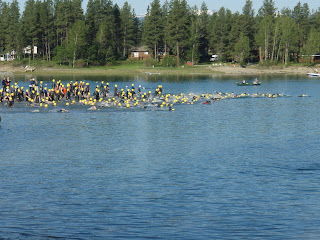 Sprint Start
At the end of the day Victoria a athletes faired well, with Leif posting the run of his life and a top ten finnish! Unfortunately, Kamal wasn't in quite as good a mood after the race. I was able to get some great training in, with a couple nice open water swims at the race site, and some good rides around the area.
I wish I could say I was impressed with the race, but other than the fantastic location I didn't find it to be very well organized. I would be interested to know why the RD made some of the decisions he made regarding transition set up and scheduling, but I don't think Wasa will be a race I will be making the trip for again.
Posted by Tyler Duncan at 9:36 AM No comments:

Tyler Duncan
Victoria, BC, Canada
I'm a 25 year old student athlete living in Victoria BC. My time is split pursuing a degree in Physical Education at the University of Victoria, training, and hanging out with my friends, with maybe a little to much being spent on the last two ;).